The Terrace RCMP Volunteers are working hard this spring and giving their time to the Speed Watch program. The goal of the program is simply this: to raise public awareness of the actual speeds that drivers are travelling, to slow down traffic, and make the roads safer for the community.

The program is conducted in partnership with the Terrace RCMP, citizen volunteers, and ICBC. Speed Watch checks are conducted by Volunteers and/or RCMP using portable radar equipment and a digital radar board to monitor speeds in neighbourhoods, schools and playground zones, or other high-risk areas.

Its main purpose is to help address traffic and speeding problems through awareness. A huge thank you goes out to our volunteers for their willingness to invest in our community. Anyone interested in being part of the program can contact Cst Cates for an application at 250-638-7400 or at kelly.cates@rcmp-grc.gc.ca. 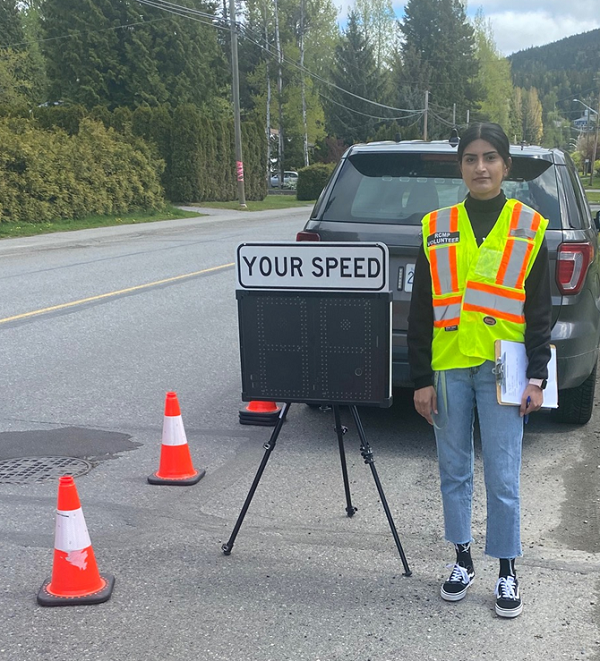 The Terrace RCMP responded to approximately 240 calls between May 14 and May 20, 2022.  Below are just a few highlights of calls for service received:

On May 14, police received a report of an intoxicated man in a convenience store who had driven himself there in a pickup truck. Police attended the area and located the described pickup truck driving on Highway 16. An officer conducted a vehicle stop with that vehicle and obtained a breath sample using an approved screening device. The test resulted in a Fail. The officer issued the man a 90 day driving prohibition and his vehicle was impounded for 30 days.

On May 16, RCMP conducted a traffic stop on Hwy 16 west of Terrace with a vehicle that had been travelling at a speed of 155 km/hr in an 80 km/hr zone. The man driving the vehicle was issued a violation ticket for excessive speed and his vehicle was towed for a seven day impound. The man declined further transportation from police and instead waited on scene for someone else to pick him up.

A woman called RCMP to report a man who appeared to be directing traffic in the roadway on Lakelse Ave Wednesday morning, May 18. She believed that the man may have been clipped by a vehicle but was still standing in the roadway. Police attended and located the man who appeared to be under the influence of alcohol and not able to care for himself properly. His identity was established and police confirmed that the man had three outstanding warrants. The man was arrested on the outstanding warrants and released from custody once sober.

While on routine patrols, an officer observed a man driving a vehicle in Terrace and recognized the man as being unlicensed. The officer conducted a traffic stop with the vehicle and the driver immediately exclaimed that he knew he was prohibited from driving. The man was served with an unlicensed prohibition, a violation ticket for driving with no license and the vehicle was impounded for 7 days.

On May 20, at approximately 1:00 am, an officer observed a pickup truck driving on Hwy 16. The registered owner of the vehicle was determined to possess a Learners license. Two of the restrictions of having a Learner’s license are to have a supervisor in the passenger seat and only to drive between 5:00 am and midnight. The officer noted that the driver of the pickup was the lone occupant of the vehicle and conducted a traffic stop. The driver was confirmed to be an L driver and had an odour of liquor on his breath. The officer continued to investigate and as a result the man was issued an immediate roadside prohibition, notice of vehicle impound, and a violation ticket for Drive contrary to DL restrictions. His vehicle was towed and the man was provided transportation to his home.

If you have information about crime contact the Terrace RCMP at (250)638-7400 or anonymously through Crime Stoppers by telephone at 1-800-222-TIPS or online at www.terracecrimestoppers.ca.