The Kelowna RCMP has returned a 1979 Wayne Gretzky rookie card to its rightful owner.

In 2015, Cst. Rick Goodwin was working in West Kelowna when he responded to a break and enter into a business and property on Byland Road. During this break and enter, vintage hockey cards were among the items stolen. The investigation was on-going for years without many leads. Eventually, the investigation went cold and as there were no further investigative avenues to be taken, it was concluded.

In 2019, Kelowna officers responded to a report of a suspicious vehicle in the area of Boyce Crescent in Kelowna. Once on scene, officers located man and woman in a pick-up truck. Upon further investigation, officers located an abundance of property inside the truck they believed to be stolen. The pair was arrested for being in possession of property obtained crime and all of the items were seized and brought back to the Kelowna Detachment where they were stored as exhibits. Included among these items, was a 1979 Wayne Gretzky hockey card.

Personnel working in the exhibit area of Kelowna Detachment came across the hockey card again in mid-April 2022 as they were disposing of the stolen property seized during the 2019 investigation. They did some research on the card and realized its potential value, bringing it to the attention of officers.

When I learned there was a vintage hockey card in exhibits, I immediately remembered the investigation from 2015, states Cst. Rick Goodwin of the Kelowna RCMP Target Team. I dug-up the details of the old file and was able to track down Mr. Moore. I was surprised to learn he still had my old business card I had given him years earlier.

Mr. Moore attended the Kelowna detachment and without seeing the card, he was able to identify it by providing an exact description, including unique details that only the owner would know. He was also able to produce records and documents that he has held onto for years.

The day finally came on April 26, 2022, when Ian Moore attended the Kelowna Detachment and officers were able to return the card to him. I am very impressed by the efforts made by Cst. Goodwin, the work he put into this investigation and how he remembered the theft of my hockey cards after so many years, states Ian Moore. I am grateful for all the hard work that has been done to return my card. 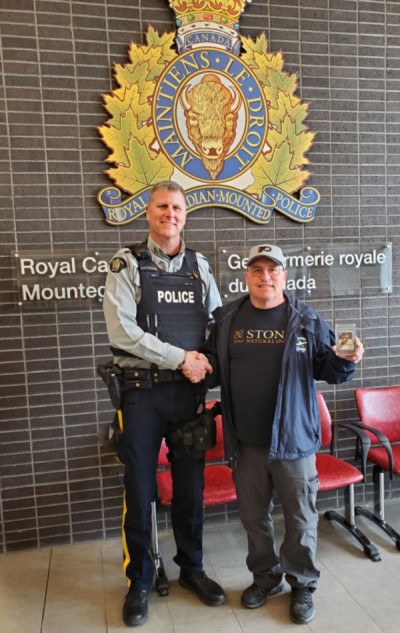