The Kelowna RCMP is investigating a series of incidents in which 59 Kelowna Transit shelters have been vandalized. The City estimates it has had to spend at least $50,000 to replace the damaged glass.

During an incident on Rutland Road in the late evening of January 22, 2022, a witness reported an old model blue Nissan/Datsun or Toyota car driving slowly past a bus shelter. The witness then heard what sounded like a high powered air gun being fired, and the glass in the bus shelter just shattered. The investigation into this incident is ongoing.

Transit Service Coordinator Mike Kittmer of the City of Kelowna states, In addition to denying transit users some protection from our winter weather, these incidents of vandalism have cost the taxpayers of Kelowna at least $50,000, just to replace the glass alone.

Anyone who may have information on these incidents of vandalism is urged to contact the Kelowna RCMP at 250-762-3300 or remain anonymous by calling Crime Stoppers at 1-800-222-8477, or by leaving a tip online at www.crimestoppers.net. 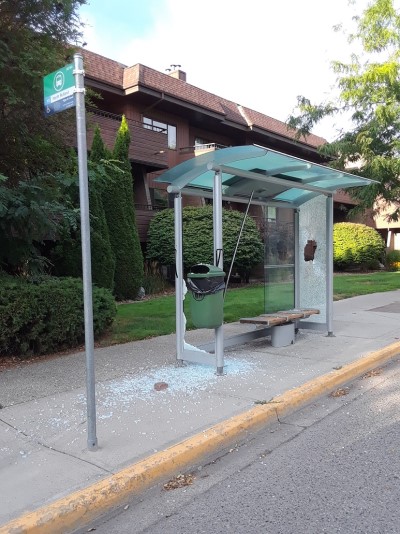