In February and March, 2022, Terrace RCMP partnered with BC Conservation Office, Bylaw Officers, and Natural Resource Officers to address a problem camp site that had been established off of a forest service road near Jack Talstra Way.

During the fall and winter of 2021, it had come to the attention of Terrace RCMP that squatters had set up a make shift camp site in this area and suspected that the sole purpose of the camp was to facilitate crime.  Police began to monitor the area and noticed suspicious activity. 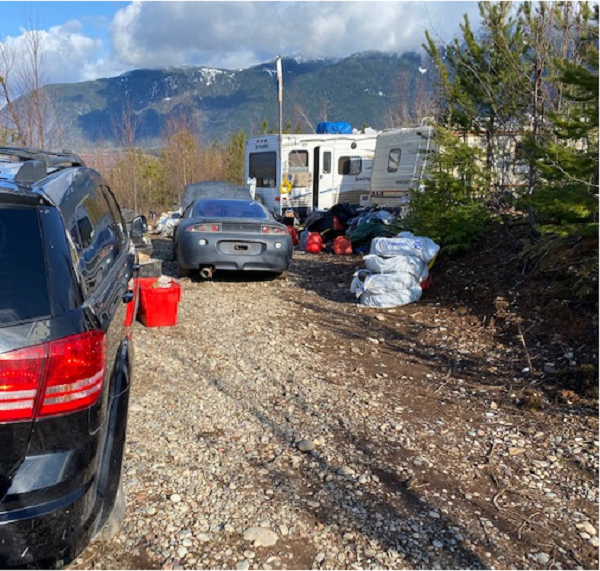 The camp also became a concern to other agencies as it had been set up on land belonging to the City of Terrace and the amount of litter around the site was becoming an issue.

On March 1, 2022, for the purpose of keeping the peace, RCMP attended the camp site with BC Conservation and City of Terrace Bylaw. Various travel trailers and vehicles were on site. One man occupied the camp at the time. Conservation issued him a ticket for attracting dangerous wildlife. City of Terrace Bylaws issued a Notice of Trespass and the male was advised to vacate the area.

During attendance at the site, RCMP Officers observed stolen property and arrested the lone camp occupant for possession of stolen property. The RCMP obtained a warrant to search the vehicles and structures at the location.

During the search, police located and seized prohibited weapons, a firearm, over 400 grams of suspected illicit opioids, and various items suspected to be stolen including motorcycles, a chainsaw, and propane tanks. The arrested male was released with no process pending investigation.

Police believe there to be additional suspects related to this camp site and are investigating the matter further.