At 12:30 p.m. on January 29, 2022, a Kelowna RCMP Traffic Services officer was working in the downtown area when they observed a driver using a cell phone. The officer conducted a traffic stop on the vehicle in the area of Queensway Avenue and during the traffic stop the officer learned the driver was prohibited from driving. When the officer arrested the driver, the driver attempted to flee the scene and resisted arrest before he was safely taken into police custody.

While searching the driver, officers located a loaded handgun and a small amount of suspected methamphetamine, fentanyl and cocaine. 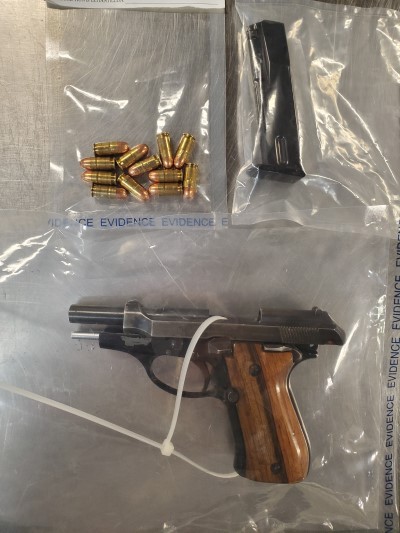 This is a clear example of the dangerous types of situations our police officers are faced with while performing their regular duties, states Cpl. Tammy Lobb, Media Relations Officer for the Kelowna Regional RCMP. The downtown core was very busy on Saturday and this incident occurred close to Stuart Park where many citizens had gathered for the rally. Learning that an individual was driving around our community at this time with a loaded firearm is unnerving.

27-year-old Daniel Legue was remanded into custody and numerous charges will be recommended under the Criminal Code, Motor Vehicle Act, Cannabis Control and Licensing Act and the Controlled Drugs and Substances Act, including: