The Kelowna RCMP did not have a silent night on December 25th when they arrested a prolific offender who had been on a crime spree.

At 7:50 a.m. on December 25th, 2021, the Kelowna RCMP responded to a report that a male suspect had broken into a business on Neave Court in Kelowna. The victim of the break and enter provided information regarding the suspect’s direction of travel which assisted officers in locating the truck the suspect had been driving.

Frontline officers, with assistance from Police Dog Services, found the truck on Granite Road in the McKinley Beach area. Investigators later learned the 1999 Dodge Ram had been reported stolen out of Nakusp on December 21st, 2021.

PDS dog Jak and his handler tracked the suspect who was found hiding under a newly built home being constructed on Arrowroot Drive. The suspect resisted arrest by pulling away from the PDS team and he was subsequently apprehended by Jak and his handler. He sustained minor injuries and was treated at Kelowna General Hospital and released. Jak and his handler joined the Kelowna Regional RCMP Police Dog Services team in November of 2021, states Cpl. Garfield Henderson of Police Dog Services. Since they arrived, they have successfully apprehended 13 persons involved in criminal activity. 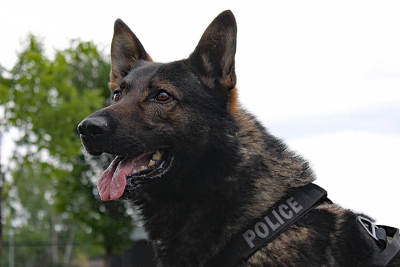 The suspect, a 41-year-old man from Nakusp, was remanded into custody until his next court appearance. He will be facing the following charges under the Criminal Code as well as the Motor Vehicle Act: