The Kelowna RCMP is investigating a string of suspicious circumstances that have occurred at a construction site in the 600-block of Rutland Road North in Rutland, BC.

Throughout the month of December, the RCMP have responded to three separate incidents at this location. The first was on December 6, where the Kelowna RCMP was called to the site by the Kelowna Fire Department in response to an item being located on the property designed to cause damage to the natural gas line going to the building.

The second incident occurred on December 15, when officers responded to a report of a suspicious person at the site. The person was no longer in the area when police arrived; however, it was later determined this individual had gained access to the garage area and was observed walking around the property.

The most recent incident occurred on December 21. Police responded to the site when accelerants were located near the natural gas line designed to cause damage the line. The nature and description of the items located are not being shared at this time to protect the integrity of the investigation.

Although the investigation into the correlation of these incidents is in its infancy, they are localized to this specific site and area. These incidents have all occurred in the early morning hours between 6:00 a.m. and 6:30 a.m. In the interest of public safety, the Kelowna RCMP is encouraging the public to call 911 if they see any suspicious activity around the site.

We are dealing with three separate incidents and believe there to be one male suspect. The motive is not known but the actions of the individual, had they been successful in their efforts, had the potential to cause serious damage to property and would have endangered the safety of anyone who would have been nearby at the time. We need your help to identify the person responsible. Said Cpl. Tammy Lobb, Media Relations Officer for the Kelowna RCMP.

The investigation is being led by Kelowna RCMP General Investigative Services who is working closely with the property owner. The property owner has since increased security measures to prevent future incidents.

If you have any information about the suspect or these incidents, please contact the Kelowna RCMP at E_Kelowna_General_Enquiries@rcmp-grc.gc.ca or remain completely anonymous by calling Crime Stoppers at 1-800-222-8477 or by leaving a tip online at www.crimestoppers.net 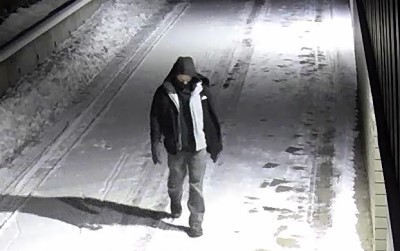