On November 5th, 2021, Kelowna RCMP responded to a break and enter at a construction site. During the break and enter, $20,000.00 worth of audio equipment was stolen.

The Kelowna RCMP Target Team led this investigation and were able to identify a suspect who was in possession of the stolen property. On November 18, 2021, the Target Team executed a search warrant a residence in the 1300 block of Gordon Drive.

The suspect, a 45-year-old man, was arrested on scene without incident for Possession of Property Obtained by Crime as well as outstanding arrest warrants. During the search of the residence, officers seized additional stolen audio equipment and two handguns. 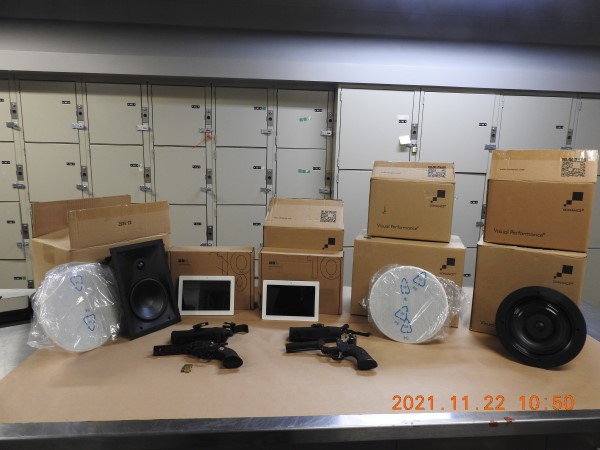 With the diligent work of the victim to locate their property, the RCMP members were able to identify the suspect and a location where the property would be located, said Sgt. Desmond Kiehlbauch – Kelowna RCMP Target Team. This investigation demonstrated that the Kelowna RCMP is able to use a variety of techniques to gather evidence and return property to victims of crime.

The investigation is on-going and charges related to the stolen property and firearms will be recommended to BC Prosecution Services. The following is a list of criminal charges and charges under the Motor Vehicle Act the accused could be facing: