Kelowna RCMP is investigating an armed robbery with a firearm.

At 10:45 p.m. on November 7, 2021 a man and woman entered a cannabis store on Lawrence Avenue, Kelowna and demanded money from an employee.

The pair threatened the employee with a firearm and fled on foot with an undisclosed amount of cash and store merchandise, says Cpl. Tammy Lobb. Kelowna RCMP and Police Dog Services searched the area, but were unable to locate the suspects. No one was physically injured during this incident. Police are releasing images of the suspects in hopes that the public can aid in identifying them, adds Cpl. Tammy Lobb.

The male suspect is described as a tall white man with a muscular build. He was wearing a dark grey Under Armour hoodie with black overalls, black gloves, and a half-face mask with a skull design.

The female suspect is described as a white woman of average height, small build, wearing an orange or faded red Lululemon hoodie with light blue jeans. She had shoulder-length frizzy red hair and black framed glasses. She was wearing black gloves and a light coloured half-face mask. 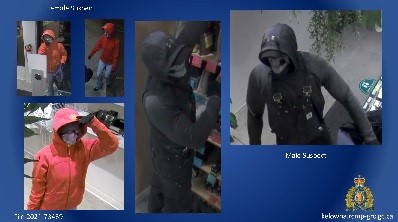 Investigators believe this was a targeted robbery and encourage other cannabis stores to be vigilant in their security measures and to report any suspicious activity to their local RCMP detachment.

The investigation is ongoing and is being led by the Kelowna RCMP General Investigative Services - Robbery Unit. Anyone with any information on or who may have witnessed this incident is asked to contact the Robbery Unit at 250-762-3300 or remain completely anonymous by calling Crime Stoppers at 1-800-222-8477 or by leaving a tip online at www.crimestoppers.net