On October 29, 2021, shortly before 11:00 am, Merritt RCMP front line officers were called to Larson Hill on Highway 5 (Coquihalla Highway) for a collision involving a semi truck with trailer and four passenger vehicles. When officers arrived four of the five vehicles involved were on fire. An officer and Ministry of Transport Employees were able to pull a vehicle out of harms way while the driver was trapped inside, saving his life from the impending fire. Two of the occupants involved the crash remain in critical condition in hospital. 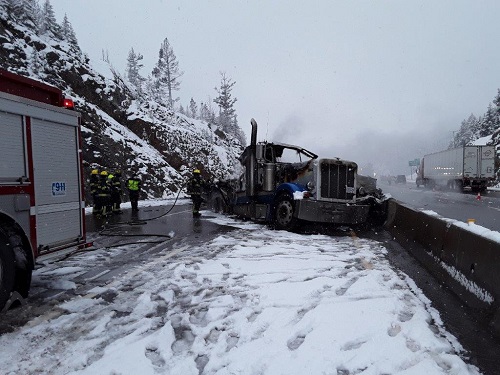 "This a stark reminder for people that winter is here." says Sgt. Josh Roda. "Snow and speed don't mix, and everyone driving on our highways needs to slow down and have winter tires or chains."

Merritt RCMP is seeking dashcam footage from any vehicles in the area that may have captured the collision or events leading up to it. Police are also seeking witnesses that have not already spoken with officers that were in the area and may have information regarding the collision. Please call the Merritt RCMP at 250-378-4262.