Kelowna RCMP is seeking information on a suspect after an alleged attempted home invasion on Monday morning.

On September 6th, just after 11:00 a.m., Kelowna RCMP responded to a residence in the 200-block of Riverside Avenue in Kelowna. A man dressed as a utilities worker had knocked on the door of a residence and convinced one of the occupants to step outside with him. Once outside, the suspect had sprayed the man with what is believed to be mace.

The victim, a man in his 60’s, was able to run back into the residence and prevent the suspect from entering. The suspect fled when his attempts to gain entry failed, says Cpl. Jocelyn Noseworthy of the Kelowna RCMP. This was a very frightening incident for the occupants of the home who were simply enjoying a quiet Labour Day morning. 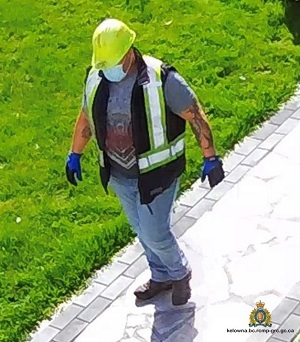 Police are looking for a single suspect. He is described as a heavy set man approximately 5’10 tall. He was wearing:

Police are asking nearby residents to check their home security video systems and dash cams to see if they may have captured the suspect in the area that morning.

If you happen to have witnessed this incident, captured it on video, or have information that may help RCMP identify and locate the suspect, please contact the Kelowna RCMP at 250-762-3300.

Should you wish to remain anonymous, please call CrimeStoppers at 1-800-222-TIPS (8477) or visit them online at www.crimestoppers.net