The Prince George RCMP are seeking help from the public to identify a shoplifter from Shoppers Drug Mart.

Shortly after 9:00 p.m. on Tuesday, March 2, 2021, the Prince George RCMP received a report of a theft from Shoppers Drug Mart located at 693 Central Street East. Employees at the retail location stated a female shopper loaded up a basket with approximately $500 in perfume and attempted to leave the store. When staff at the location confronted the female, she threatened to stab them. The suspect then left the store on foot across Highway 97N, states Cst. Jennifer Cooper of the Prince George RCMP.

Extensive patrols in the area by frontline members did not result in a sighting of the suspect. Staff described her as: 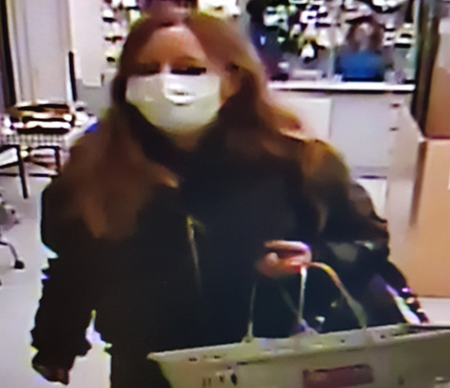 If you have any information about this criminal offence, please contact the Prince George RCMP at (250)561-3300 or anonymously contact Crime Stoppers at 1(800)222-8477 or online at www.pgcrimestoppers.bc.ca (English only). You do not have to reveal your identity to Crime Stoppers. If you provide information that leads to an arrest or recovery of stolen property, you could be eligible for a cash reward.