Police received reports of the altercation near 145 Chadwick Court, just after 9:15 p.m. When they arrived, they located a 26-year-old man suffering from a significant slash wound to his arm. An officer immediately rendered emergency first aid, applied a police tourniquet, and called for paramedics. The injured man was taken to hospital with serious but non-life threatening injuries.

Police learned the altercation involved a group of four to five individuals who had fled the scene prior to police arrival. Some time later, officers conducting patrols at the Phibbs Exchange bus loop at Main St and Hwy 1, located two individuals who matched descriptions provided by witnesses. After further questioning, they detained both individuals, one a 17-year-old male, and the other a 13-year-old male. They were each found to be in possession of machetes, and were arrested for possession of a weapon for a dangerous purpose. The two youths have since been released into the custody of their guardians, on conditions that include not to possess any weapons and not to go to the area around Lonsdale Quay.

Police continue to investigate, and are asking anyone with video evidence, or who witnessed the altercation, to contact them at 604-985-1311. Police are also asking anyone with CCTV cameras or dash cam video, to check their footage for evidence between 9:00 p.m. – 9:45 p.m. on June 1, 2022: 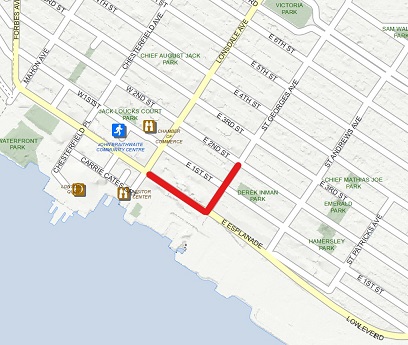