To swine and protect?

Oliver, BC Wildfires, This Is What We Do

Cst. Brad Walsh of the Oliver RCMP Indigenous Policing Section went beyond the normal scope of his duties this week.

On Monday afternoon, as the Nk’Mip Wildfire was threatening homes on the Osoyoos Indian Band Reserve near Oliver, BC, Cst. Walsh was the first emergency responder on scene and went door to door evacuating residents. Cst. Walsh was familiar with one of these properties and the animals there. The following days, Cst. Walsh returned to the property on Inkameep Rd and discovered several animals did not survive the fire. He did locate a pig that was without any food source. Cst. Walsh took it upon himself to attend the local Buy Low Foods in Oliver, who donated a large supply of spoiled produce which he delivered over the next two days, until the owner of the property returned. 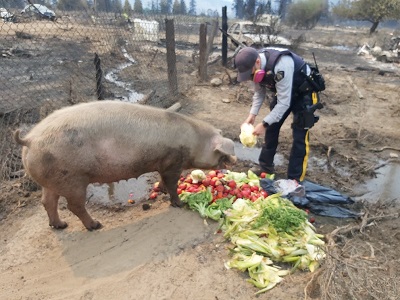 Cst. Walsh went above and beyond this week in his response to the citizens of our community, stated Sgt. Don Wrigglesworth, The compassion shown to go out of his way for this animal is heart warming, especially during this time of high stress and danger for so many people. I know the comments and captions are going to roll in mocking police and calling us pigs, but there are few people out there who have stepped up like Brad did this week.