On the morning of November 11th, 2020, Kelowna RCMP received a report that an unknown person had written what appears to be messages regarding freedom and constraints on Kelowna City Hall on Water Street. This incident occurred at approximately 4:30 a.m.

Our initial investigation has led us to search for a person of interest in this matter, says Cpl. Jocelyn Noseworthy of the Kelowna RCMP. He is described as approximately 6 feet tall, slim build, wearing ripped blue jeans, a balaclava, and a black winter jacket with a hood.

A still photograph of this person is being released in the hopes that someone in the public will be able to identify this individual. 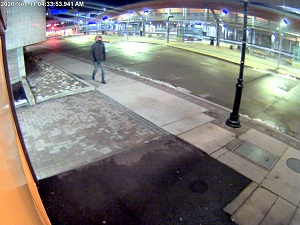