Two men have been apprehended by Police Service Dog Mysan after they fled from police.

Shortly before 4:00 a.m. on April 6, 2022, Kelowna RCMP officers responded to a report of a theft of gas that had occurred at construction site in the area of Highway 33 and Pyman Road. The information received was that three male suspects driving a U-Haul cube van, were filling up large barrels with gas they had stored in the back of the cube van.

Frontline officers attempted to stop the cube van as it left the construction site and the occupants fled from the vehicle on foot. Kelowna RCMP Police Dog Services (PDS) assisted in the search for the suspects who fled into the wooded area.

PDS dog Mysan and his handler tracked the suspects and located two of them who were both found hiding in the woods, states Cpl. Garfield Henderson of Police Dog Services. Both suspects were arrested by the PDS team. The two suspects sustained minor injuries and were treated at hospital. This was a job well-done this morning by Mysan and his handler, who joined the Kelowna Regional RCMP Police Dog Services team in May of 2021. 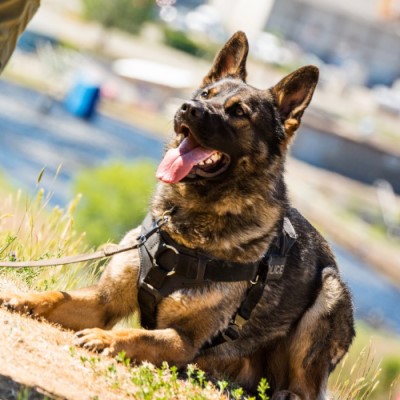 The suspects, a 35-year-old man and a 39-year-old man, are possibly facing charges related to their arrest for theft under $5000.00 and flight from police.

Anyone who may have information regarding this incident and the third suspect involved is urged to contact the Kelowna RCMP at 250-762-3300 or remain anonymous by calling Crime Stoppers at 1-800-222-8477, or by leaving a tip online at www.crimestoppers.net.